Cafe Crawler Lucy is a food blog where you can find the hottest cafe and restaurant reviews in Wellington, New Zealand & beyond. 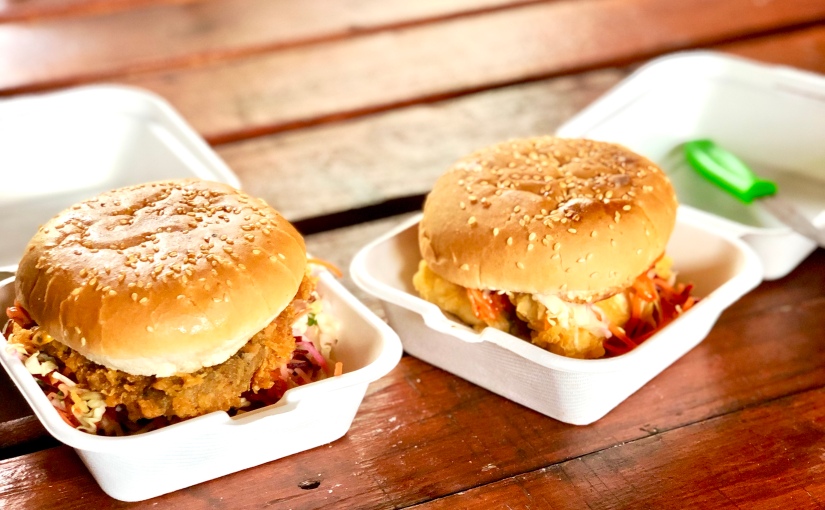 Since becoming a pescatarian, I find myself obsessing over the taste of tempeh, the savour of seitan, and the sheer variety of meals you can make from plant-based meat alternatives – don’t even get me started on the power of the humble pea. But I find that a lot of restaurants and cafes don’t experiment with these incredible ingredients, are still stuck in the ‘oh we’ll chuck a mushroom risotto on the menu for the vegetarians’ mindset. But thank god that in Wellington, we have an abundance of vegans and vegetarians who have entered the food scene themselves and made it their goal to feed us plant-based people some seriously tasty vegetarian food. The forerunner in this operation? Plant Blazed, of course.

For those of you who don’t know about Plant Blazed, it’s a little pop-up caravan parked behind the famous Recycle Boutique, which serves up some big boy burgers, hefty hotdogs, and succulent salads. The catch? It’s all vegetarian. They say never to judge a book by its cover – and this saying is way too accurate when you arrive at plant blazed. The boys at Plant Blazed are beard-bearing, heavy metal blaring burger addicts, who love to create flamin’ hot sauces. When you imagine this, you’d think they whip up classic American BBQ beef burgers and fat Chicago dogs right? Wrong. These boys are here to break the stereotype and bring only delicious plant-based burgers to the streets of Wellington. So now we know who Plant Blazed is and what they do, let’s sink our teeth into the burger breakdown.

Luckily, I had just smashed out a 2 hour walk before coming here, so eating a carbalicious burger was no issue to me. After glazing at their menu, I thought to myself “f**k, this all looks delicious” (shout out to my man Action Bronson for that quote). It’s true though, all the combinations of their burgers sounded too sensational – who knew a veggie burger could have somebody in such a conundrum?? At last, I ordered their Laverne Cox, whilst my partner went for their Crying Nut burger. We also ordered a few chips, because whats a burger without a side of chips?

When my burger hit the table, it was quite literally bulging out of its little box (which was compostable – woop!), and I could JUST about get my mouth around it (get your mind OUT of the gutter, please). I’ve never tried seitan before, but holy sh**, it kicks southern fried chicken’s ass! This seitan patty combined with layers of slaw, corn, and pineapple, all smothered in a peri peri sauce made for a burger that slays all other burgers of Wellington. I’m lowkey gutted I gave half to my partner, because I could’ve smashed the whole thing. However, that being said, I tried half of the Crying Nut burger – a tower of fried tofu, kimchi, gherkins, toasted sesame seeds, and dragon mayo – which tasted like a flipping boss bao bun, but in burger form. I cannot express just how incredible the tofu tasted, and how perfectly it was cooked. At last, the chips. Honestly, pretty average – I reckon they could’ve been fried just a little bit crispier – but one of the lads let us try his homemade hot sauce with our fries, and ho-damn that sauce saved the day. It was spicy, sweet, sour, salty, and deffo lit a little fire in your throat.

If you’ve made it past my ramble – well done – it’s not judgement time. This burger feast is up there with one of the best I’ve ever had, and I can’t express my sheer happiness that it’s all vegetarian and vegan! The burgers were absolutely faultless, and I now see why they have so many raving reviews – I reckon they’ve even converted some meat eaters out there! The chips were a little average, but hey, they’re not famous for their fries, are they? The lads were super social, and you could just feel their passion when they yarned about their craft. The location is perfect being tucked away behind one of Wellington’s busiest streets, and I love how they don’t boast about themselves – they rely on word of mouth, and the words that are being said about these burgers are nothing but positive! Plant Blazed, you really exceeded my expectations, and I’m gonna have to award you a 9.5/10. The chips could be better, but don’t ever change anything to your burgers. I’ll be back.